August 31, 2019
There's been a lot of handwringing about the 2016 polls over the last two and a half years. How could Hillary Clinton have lost to Donald Trump when all the pollsters had her beating him by a comfortable margin? Were the 2016 polls wrong, and if so, why?

To answer that, it's important to differentiate between the polls and pollsters. Then, after that, we need to explain the difference between national polls and state polls. Because when we do that, we begin to see what really happened that year, and why the same mistakes could be made next year.

First off, polls are samples of what the electorate is thinking at any given moment. Pollsters are people who are paid to analyze the data from those polls. Why is this important? Because I believe that in the days leading up to the election, the polls were trying to tell us something that the pollsters didn't want to hear: namely that the race had become no better than a tossup.

Here's where we have to separate the national polls from the state polls, because while it was true that Hillary led in the national polls, there were danger signs in several swing states that any half-way decent pollster should've been able to pick up on.

Below is the last RCP average for the national election, which showed Clinton with lead of 3.3 points. As you can see there is very little difference between her average and the final results; just over a point. She would go on to win the popular vote by almost 3 million. 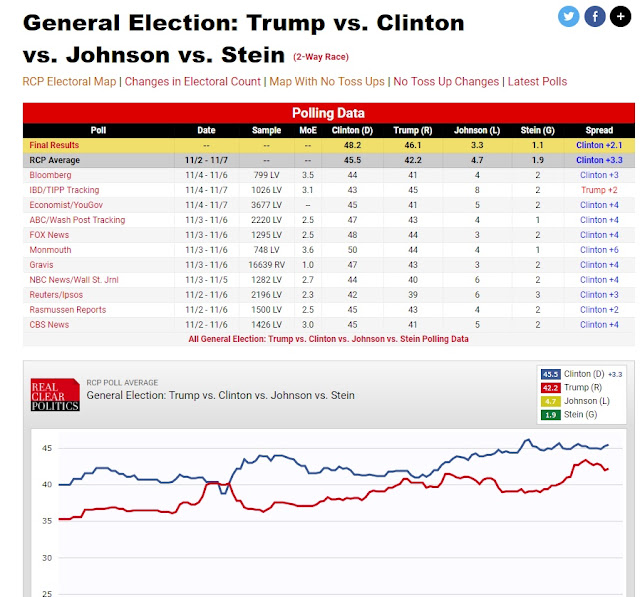 However, the RCP average in Pennsylvania and Florida, told a considerably different story. There the race was much tighter. Both states were ostensibly tossups, with Clinton holding a slight lead in Pa. and Trump doing likewise in Fla. Both were within the margin of error. It's also clear that the presence of Jill Stein on the ballot in Pennsylvania undoubtedly cost Clinton the state. Stein got just 0.8 percent of the vote; Trump won the state by only 0.7 percent. Of course, to be fair, Gary Johnson took votes away from Trump. 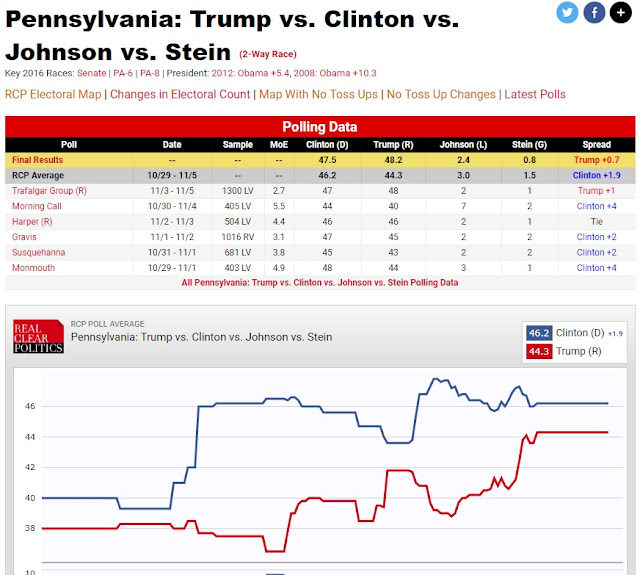 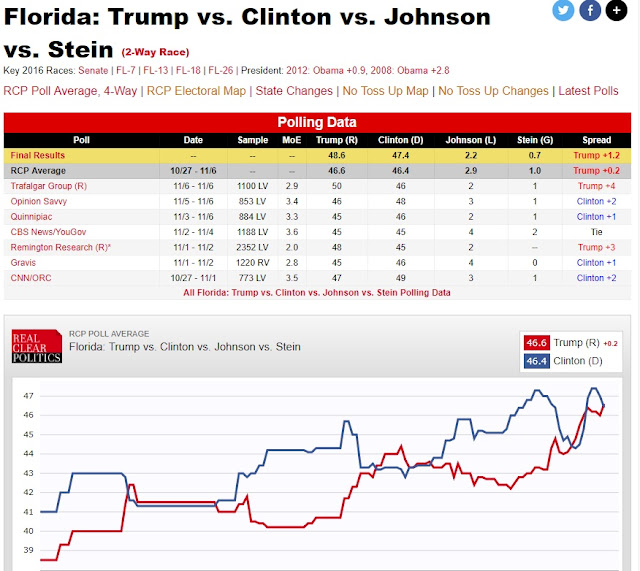 My point is that if you were only paying attention to the national polls, you probably thought Clinton had the election in the bag. And that's what the pollsters, no doubt, believed. Indeed, Clinton's lead over Trump in 2016 was larger than Obama's lead over Mitt Romney in 2012, and Obama cruised to a landslide.

However, Obama, unlike Clinton, led Romney in all the key swing states that he needed to win reelection; Clinton, for the most part, trailed in Ohio, Iowa, North Carolina and Florida late; meaning she had to sweep Pennsylvania, Michigan and Wisconsin to avoid losing. The multiple paths to victory that Obama enjoyed four years earlier, was reduced to a single one for Clinton, and as fate would have it, she didn't even get that.

The moral of the story is that national polls are ultimately irrelevant so long as we have the electoral college. Pollsters must concentrate on the polls in those key swing states that determine the outcome of a presidential election. Had they done that in 2016, those polls would've told them that Clinton was anything but a shoo-in. Indeed, Nate Silver of FiveThirtyEight, on the eve of the election, warned against over confidence, giving Clinton only a 71 percent chance of winning, which is just slightly north of a push, to use a betting term. Most of the other "experts" were far more bullish on Clinton's chances. By election night, they were scraping egg off their faces.

Hopefully, this time around, the pollsters will have learned their lesson. I love eggs, but I much prefer them on a plate where I can eat them.
2012 election 2016 election Barack Obama Donald Trump general election Hillary Clinton Mitt Romney Nate Silver popular vote Presidential polls RCP swing states