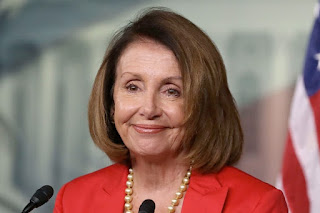 In six days, Nancy Pelosi will become the Speaker of the House; the first time she has held that position since the infamous 2010 Tea Party wave that swept Republicans into the majority. And when she officially takes the gavel, she will be presiding over a chamber that is part of a government shutdown that the current occupant of the White House brought about.

So what should Democrats do as their first act as a majority of the "People's" house? Pelosi has, I believe, two possible courses of action: the first is to pass a clean continuing resolution, much like the one Mitch McConnell managed to pass in the Senate 100 - 0. It would have $1.3 billion for border security, but no funding for the wall. The CR would extend till February 8, when Congress would then have to either pass a budget through appropriations or pass another CR.

Such a move would force McConnell's hand. Deep down he knows there's no way he's going to get 60 votes for Trump's wall. Hell, he doesn't even have 50 votes for it. The leverage Trump and his minions think they have - if it exists at all - will vanish with the new year. Whatever else you may think of McConnell - and I've thought 'em all - he has no intention of dying on this beach head, not with a losing hand. My guess is that McConnell will resist but eventually put the House bill to a straight up and down vote and it will get at least 70 votes. 70 is three more than the number required to override a presidential veto. In other words, Trump is up a creek without a MAGA hat to paddle with.

But the other option Pelosi has is far more daring, but potentially rewarding, and if she pulls it off, it will be the coup of the year. She should call Trump's bluff and resurrect the offer Democrats made to him last January. If you recall, Dems put $25 billion on the table for Trump's wall in exchange for letting the 1.7 million dreamers stay legally in the country. It looked like a deal until Stephen Miller, Ann Coulter and the rest of the Third Reich got their swastikas in a bunch and forced Trump to renege on the whole thing. Trump ended up getting bupkis for his wall and the fate of the dreamers is still hanging in the balance.

So why should Pelosi have any reason to believe Trump will sign off on a deal he rejected a year earlier? She doesn't; that's the point. No one by now seriously believes Trump will lift a finger to help the dreamers. He knows the moment he does he's finished with his base. And without his base, Trump could potentially lose all 50 states in 2020. So why go down that rabbit hole again? Because it boxes Trump into a corner that he can't wiggle his way out of.

Think about it. Since shutting down the government, Trump has been trying to paint Democrats as weak on border security simply because they don't think a 19th century solution to a 21st century problem is a practical way of spending billions of dollars of taxpayer money. Even some Republicans agree.

With one bold and and daring gesture, Pelosi and House Democrats can not only call this president's bluff, they can effectively steal his thunder and make the case to the electorate that they are the ones who are willing to make America safe, while at the same time make the case for protecting 1.7 million dreamers, who just about every body agrees did nothing wrong and should be allowed to stay here legally. Even Fox News would be forced to concede it was a stroke of genius.

If nothing else, Pelosi will be serving notice to this president that he isn't going to get the better of her. Unlike the last two Republican speakers, who were about as useless as lint on a brush, this speaker has the potential of making Trump's life a living hell. And as we all know the only thing Trump hates more than losing is losing to a woman.

With Democrats prepared to subpoena his administration nine ways to Sunday, if I were him, I'd get used to it.
Border security continuing resolution Donald Trump Dreamers government shutdown House Democrats Mitch McConnell Nancy Pelosi