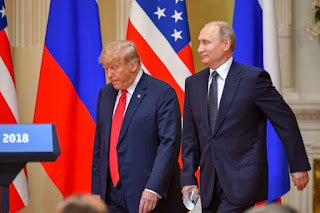 Just so we're clear: no one should be in the least bit surprised at what happened Monday in Helsinki. Those who held out hope that this president, after berating our NATO allies and undercutting the Prime Minister of Great Britain only days earlier, would somehow defend the United States against a hostile adversary like Vladimir Putin, are either in denial or dangerously naive.

Ruth Marcus called on everyone who currently works for this president to quit "now." With all due respect to Ruth, the time for doing that has long since come and gone. If watching this man make fun of a disabled reporter, ridiculing the parents of a gold-star service man, referring to Mexicans as rapists and calling the free press the enemy of the people wasn't enough of an incentive for them to quit than nothing that happened this Monday will shame them into resigning. You can't lose your soul if you never had one to begin with.

What happened in Helsinki was nothing short of alarming. We watched in horror as a sitting president humiliated himself on the world stage, standing alongside the man who was responsible for interferring with, and most likely deciding the winner of, the 2016 presidential election. The editorial board of The Washington Post was correct when it said Donald Trump openly colluded with Russia through his words.

There can be no other explanation for this inexplicable behavior. How else can you explain why he would once again take the word of Putin over his own intelligence community? That was insulting enough, but then he one-up'd the ante by giving serious consideration to an invitation by Putin to have Robert Mueller's team travel to Russia to interview the twelve defendants recently indicted by Rod Rosenstein with Russian investigators present. The mere suggestion that both Justice departments are on equal footing is a slap in the face to every law enforcement official in the country.

This isn't merely the machinations of an insecure man who can't handle the notion that a foreign entity may have helped him win the presidency; it's evidence of someone who has a great deal to fear from that entity and is doing everything possible to bend over backwards so that the truth doesn't come out. Just look at the body language of both men. On one hand, we had Putin, who at times seemed to be smirking over his good fortune; on the other, we had Trump, who often looked down and was submissive in his tone. And this from a man who has spent his entire life destroying anyone or anything that got in his way.

What more evidence do we need to conclude that this man is compromised as a president? What does he have to do, order Borsht and a vodka martini? We're told that words like treason are irresponsible and over the top. Really? What else would you call a man who colludes with a dictator who has been actively engaged in undermining every Democracy in the West, including ours? I mean, Putin stood right next to him and admitted his wrong doing, and still he couldn't bring himself to condemn him. Benedict Arnold did less harm and was branded a traitor for his actions. We should stop pussyfooting with Trump.

His enablers are running out of excuses, and his co-conspirators are running out of time. Christ, even Fox News called him out. It's time for what's left of the Republican Party to take a stand while there's still time. And by Republican Party, I don't mean the few "brave" souls, like Jeff Flake and Bob Corker, who've decided to run for the hills, or John McCain, who's dying of cancer and who may have only a precious few months to live. I'm talking about the whole damn GOP. Compared to what this man is doing to this nation, Nixon was Florence Nightingale.

If this were Hillary Clinton throwing her own Justice Department under the bus, she'd have been impeached before Air Force One touched down at Andrews Air Force base. Obama bowed to a foreign leader and Republicans lost their shit over it. What does it take for these miserable hacks to put country before party? I mean they've got Mike Pence in the bullpen. What else do they need? Balls, I suppose.

And therein lies the problem. They're scared shitless of Trump. What Putin has done to him, he's done to the GOP. I've never seen such an epic lay down in all my life. Professional wrestlers put on a more convincing performance getting pinned to the mat than Republicans manage to pull off objecting to Trump's behavior. Compared to them, the movie "Dirty Mary, Crazy Larry" might as well be fucking "Gone With the Wind."

I have never been so ashamed to be an American as I am at this very moment. The world is laughing at us while the Manchurian candidate that Putin installed shits all over the Constitution, all with the blessing of his own party and the ignorant fools who blindly voted for him.

Our only hope is the midterms. If Democrats don't at least retake the House, it may be too late to stop Trump in 2020. He already has amassed 80 million dollars for his reelection bid. If he wins another term in office, this slow-moving coup will be complete and the Republic that was founded more than two centuries ago will cease to exist.