What If Mitt Romney Had Won the 2012 Election? 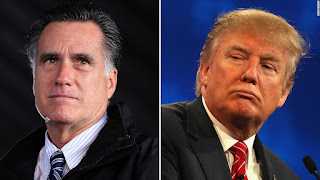 Seeing as how it's President's Day and the current occupant in the Oval Office is about as presidential as a four-year old in a time out, I thought I'd spend a little time and ponder an important question. What if Mitt Romney had won the 2012 presidential election?

Look, I know it's never a good idea to engage in revisionist history and I am somewhat concerned about the plethora of liberals who have gone all googly-eyed over the rash of conservative writers that are leading the anti-Trump movement. Steady on, people, they may hate Trump, but it was only a couple of years ago that these same bastions of conservatism were focusing their laser beams on Obama and the Dems. Look up some of Jennifer Rubin's pieces from, say, 2015, if you have any doubts. Some of my brethren have even gone so far as to say out loud, and with a straight face, that they miss George Bush. If you're looking for a reality check, this skit by Will Farrell on SNL should more than suffice.

But, all that aside, I believe I can deliver and honest and objective assessment based on what we already know about the events of that year. Looking back on my writings, what stands out for me was how Romney was trying to have his cake and eat it too. On the one hand, he wanted to run on his record as a Republican governor in a blue state, which I always thought was his strongest argument to make to the electorate. On the other hand, he was running against Rick Santorum, a man who makes Mike Pence look like John Kasich. I once wrote an open letter to Romney in which I implored him to stop trying to move to the right of Santorum. "Air can't run to the right of Rick Santorum," I said.

I wasn't alone in my chastisement. David Frum wrote just before the election, "Mitt Romney's campaign has been one long appeasement of the most selfish and stupid elements of the Republican coalition, and the instinct for appeasement will not terminate with the counting of the votes next Tuesday." Yet Frum still believed that, if elected, Romney could lead effectively, because while he may have pandered to his base to get the nomination, that was not who he was at heart. "Massachusetts Mitt - the Mitt who hurled himself into the battle for universal health coverage within his state - also came from someplace real."

In the end, it was the pandering that cost him the election. After a brilliant performance against Obama in that first debate in Denver where the country finally had a chance to see what Frum called Massachusetts Mitt, Romney couldn't help himself. He had so boxed himself in during the primaries that he was unable to successfully pivot to the center.

But what if Romney had been able to make that transition? What if, instead of picking Paul Ryan as his running mate, he had chose someone like Rob Portman from Ohio? What if, instead of campaigning on repealing Obamacare, he chose to run on fixing it? What if, instead on demonizing Obama like so many in his party were doing, he decided to compliment him on some of the things he had done right and stressed that the country needed someone who could improve things?

I actually think had Romney run that type of campaign, he could've beaten Obama; not by a lot, mind you, but, as we learned in 2016, it doesn't take a lot to win a presidential election. Sometimes it doesn't even take a majority of the popular vote.

So what kind of president would Mitt Romney have made? Well, I tend to agree with Frum. Policy wise, I think it would've been very difficult for him to have pulled his party to the center. The forces that are currently running things over at GOP Central make Barry Goldwater look like Nelson Rockefeller. Romney's tax cut would undoubtedly have been passed, and regulation after regulation would've been undone. As for Obamacare, as we found out in 2017, it's a lot easier to run on repealing something than it is to actually repeal it. I suspect Romney would've had the same difficulty dismantling the ACA in 2013 as Trump had last year.

What I do think could've happened is that Romney would've incorporated some of what was in his law to shore up the law. I actually think the exchanges would be in better shape. Call me optimistic, but I think Romney would've had just enough common sense to know that kicking twenty million people off healthcare to prove a point was a sure fire way to make him a one-term president.

As for foreign policy, I think Romney would've been more hawkish than Obama, but not by a lot. Remember, Obama was hardly a dove. The one thing I will give him credit for: he was right about Russia. They were, and are, our number one geopolitical threat. It's time to admit the painful truth: Putin played Obama, the same way he played Bush.

On the world stage, Romney would've been a fairly accomplished president. In spite of his policy proposals, he would've been well received and well respected. Of course, given how Cadet Bone Spurs has comported himself, that's hardly a high bar. He would've been pro-trade and anti-tarrif, the exact opposite of Trump, and he would've strengthened ties with our allies instead of undermining them. And while I don't think the economy would've grown any faster with him at the helm than with Obama, I do think it would've been in good enough shape that Romney would've won a second term.

In fact, had Romney won in 2012, I seriously doubt the whole Trump movement would've gotten off the ground. Clinton would've still run in 2016 and lost, though in this case she would've lost both the electoral and popular vote. And I actually think that having a stable man in the White House might've encouraged a few of the remaining moderates in the Party to take more of an active role in policy making, especially in the House where the Freedom Caucus has had pretty much a free reign. It also might've incentivized some centrist Democrats to seek bi-partisan consensus with their GOP counterparts. In an ironic sort of way, maybe some of the polarization that has come to define Washington over the years might've been lifted.

Then again, who knows? Maybe Romney would've turned out to be an unmitigated disaster. A more polished version of shit-for-brains, with just enough horse sense not to be a total asshole. In that case, he would've been a one-term president. Either way, the country would've been spared the embarrassment of the last thirteen months.