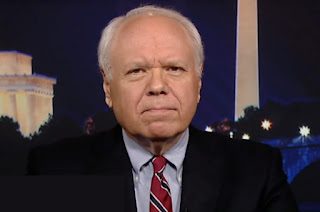 Never let it be said that Bruce Bartlett leaves anything in the bullpen. When it comes to speaking his mind, the word ambiguity is NOT in his vocabulary. Monday afternoon, Bartlett posted the following on Facebook:

A couple of hours later he elaborated further by posting this:


"If I had said that all members of the KKK are racists, no one would doubt that I am right. The KKK has a long history of racism and no one would believe a person who joined in ignorance of that fact. Same with Trump. His personal record of racism is long, dating back at least to when he was sued for not renting apartments to blacks in the 1970s, to his demand that the Central Park 5 be executed without a trial (they were later found innocent), to his disgusting denial of Obama's citizenship. His xenophobia borders on racism as does his his Islamophobia. Trump has an irrational hatred of everything Obama did that I believe is motivated by racism. EVERY major racist and racist group in America supports Trump unequivocally and he has never renounced it. Therefore, it is a simple matter of logic that ANYONE who supports this asshole is a racist. I rest my case."

He then clarified his comments by posting this:

So, in the spirit of being unambiguous, let me just state that the only thing I would've changed in Bartlett's original post would be to add the word core in front of supporters. Because I do believe it is important to separate those people who would - to use Trump's own words - stick by him even if he shot someone on Fifth Avenue from the people who support some of the things he's doing, like tax reform and appointing conservative judges to the bench. There will, I suppose, be those people who, regardless of the nominee, will vote strictly along party lines. I don't think it's fair to include them in this group.

But, apart from that, yeah Bartlett nailed it, especially his second post, which I think underscores the real tragedy here. Trump's election wasn't merely an indictment of the political institutions of this country; it was an indictment of the electorate, or at least a good chunk of it. Seven months into his administration and Trump is polling in the mid-30s. That it has not sunk any lower can mean only one thing: these are the people who are his core supporters; the very ones Bartlett was referring to.

It is nothing less than a national embarrassment to come to the realization that roughly one third of the country is comprised of racists, xenophobes, sexists, homophobes, you name it. In fact, it breaks my heart just typing out the words. While Trump did not invent any of these vices - sadly, they've been a part of the American psyche since the founding - he nonetheless amplified them in a way no politician has dared do. And he gave voice to the most depraved elements in our society in a way not seen since the Reconstruction Era.

Now before I go any further, I'm going to reiterate what Bartlett said in his third posting by differentiating between Trump's voters and his supporters. You can be a Trump voter without necessarily being a Trump supporter, but not vice versa. The distinction is not subtle. Let me explain.

Last November, Trump received about 46 percent of the popular vote. Assuming that 35 percent core was included, that meant that the remaining 11 percent he received consisted mainly of independents, blue-collar Democrats (many of them in the Rust-Belt states), and loyal (R) Republicans. That 11 percent, especially in states like Ohio, Pennsylvania, Michigan and Wisconsin, gave him the White House, but that 35 percent was the reason he didn't suffer a Walter Mondale-type defeat. Even before the polls closed, Trump had approximately 40 percent of the electoral college sewn up.

Now you know why Bartlett was fuming and why what he said had to be said. For months now, the media has been dancing around this, desperately trying to pretend that what we're witnessing isn't really happening. Watching the cable news shows these days is like watching a really dysfunctional family who can't come to grips with the fact that daddy is an alcoholic who beats his wife. Yes, they've been all over the Mueller investigation, but that's only because of the leaks that have been oozing out of this administration. They simply can't or won't bring themselves to admit what deep down they know is true: that we have a racist in the White House and his core supporters are at least partly responsible for putting him there.

Think about it. This is a man who has no moral compass to speak of; who goes wherever the winds take him. Yet, since assuming office, he has bent over backwards to appease his base. Why? From his Muslim ban to his repeal of DACA, everything he has done has fit a pattern that would make any racist blush with pride. Did you see Jeff Sessions' face during his press conference announcing the repeal? The last time Sessions looked that happy he was probably getting laid. Eight hundred thousand people are six months away from being deported and our "esteemed" attorney general was about as giddy as the Grinch who stole Christmas. I'll bet the ranch that down in Louisiana, David Duke was cuming in his pants.

I don't know what's going to happen to Bartlett. Knowing how squeamish the press is, it wouldn't surprise me if he gets canned from The New York Times or The Fiscal Times or both. But a more appropriate response, not just from the aforementioned publications, but from the press and media in general, would be to finally wake up, grow a spine and call a spade a spade.

Journalists do violence to their profession when they attempt to soft-pedal issues which demand complete earnestness. Bruce Bartlett knew the truth and had the courage to speak it. If all that ends up happening is that he becomes a sacrificial lamb, the Fourth Estate will have a lot more than just his reputation to answer for.
2016 election Bruce Bartlett David Duke Donald Trump main-stream media racists Robert Mueller xenophobia

Unknown said…
I stand with you, and of course, with Bruce Bartlett it takes real guts to speak your mind with a giant pack of Rabid Dogs waiting to pounce on the Interwebz.
September 6, 2017 at 4:49 PM