It's Time for Bob Mueller To Subpoena Trump's Tax Returns 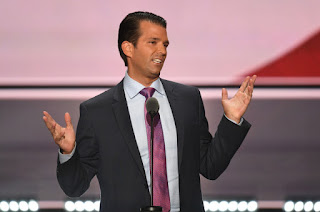 Thanks to the revelation that Mini Me - AKA Donald Trump Jr. - met with a Russian official for the expressed purpose of collecting damaging information on Hillary Clinton in order to help his father win the 2016 election, we now have clear evidence of collusion between the Trump campaign and Russia. This isn't a smoking gun; it's a fucking MX missile.

It does not matter whether the information that Mini Me and his entourage of Paul Manafort and Jared Kushner received turned out to be "much ado about nothing," as Junior said to Trump lackey Sean Hannity. The only thing that matters is what the intent was, and the intent could not be plainer. As any criminal attorney will tell you, intent follows the bullet. If you fire a gun at someone intending to kill them and the bullet kills someone else, you're just as guilty of attempted murder.

Another way of looking at it is this: If you break into a bank intending to rob it and discover the vault is empty, in the eyes of the law you're guilty of attempted robbery. The fact that you didn't come away with any money is irrelevant. And if your attorney is actually dumb enough to present that lame excuse as a defense at your trial, no jury in the world would buy it. And neither should we.

The sheer arrogance of what happened here is what is most appalling. Numb nuts actually had the gall to publish the entire email chain, which without quite realizing it confirms what any first-year law student would know: that he just put his dad and himself in a world of trouble. To quote the New York Post's editorial page of all places, "Don Jr. is why Nigerian email scammers keep trying their luck."

This is an excerpt from the exchange between Rob Goldstone, the man who set up the meeting that took place at Trump Tower, and Trump Jr.

Rob Goldstone: Good morning, Emin just called and asked me to contact you with something very interesting. The Crown prosecutor of Russia met with his father Aras this morning and in their meeting offered to provide the Trump campaign with some official documents and information that would incriminate Hillary and her dealings with Russia and would be very useful to your father.

This is obviously very high level and sensitive information but is part of Russia and its government's support for Mr. Trump - helped along by Aras and Emin.

What do you think is the best way to handle this information and would you be able to speak to Emin about it directly?

I can also send this info to your father via Rhona, but it is ultra sensitive so wanted to send to you first.

Trump, Jr.: Thanks Rob, I appreciate that. I am on the road at the moment but perhaps I just speak to Emin first. Seems we have some time and if it's what you say I love it especially later in the summer. Could we do a call first thing next week when I am back?


That's it, folks, end of story. In detective novels, this is where the cops show up with the handcuffs and read the suspect his or her rights. This one exchange alone reveals the only two pertinent facts needed. 1. An offer was made to a representative of the Trump campaign by a foreign and hostile government to engage in a conspiracy to influence the 2016 presidential election; and 2. That offer was accepted by said representative.

Oh, and as to the claim by Donald Sr. that he had no knowledge of the meeting or what took place in it, in a conspiracy the right hand doesn't have to know what the left hand is doing. In other words, ignorance - which seems to be the modus operandi of this White House - will not save dear old dad from the consequences of Junior's actions.

Now more than ever we need to see Trump's tax returns. It's obvious that Putin or some group of Russian oligarchs or both have something on him. Why else would he bend over backwards to soft peddle the greatest threat to our democracy since the British burned down the White House in 1814? Why else would he try to get James Comey to back off an FBI investigation into Michael Flynn and when that failed fire Comey? There can be only reason and I'll bet a month's salary that the answer lies in those damn tax returns.

That's why Bob Mueller must subpoena Trump's returns and review them thoroughly. As Special Counsel he doesn't even have to let the White House know about it. He can just issue it and the IRS would be compelled to comply. Perhaps that's the reason Trump thought about firing Mueller a month ago; he knew that if Mueller ever got his hands on those returns the jig would be up.

This isn't about some flimsy audit that he's under; it's about his connections to Russia. My gut tells me that Trump never expected to win the election and, so long as that was the case, his refusal to release his returns, while brazenly arrogant, posed no risks to him personally. He probably thought Hillary would beat him - a thought shared by the overwhelming majority of pundits and pollsters - and he'd land himself a new reality TV show that would make him a fortune.

But a funny thing happened on the way to that reality TV show. It seems the Russians were a little too effective for their own britches. Coupled with a slightly over zealous Comey and the self-inflicted wounds of the Clinton campaign, Trump eked out a narrow victory. And ever since he was sworn in, he's been sweating bullets over what the press, the Congress, and now Mueller might uncover.