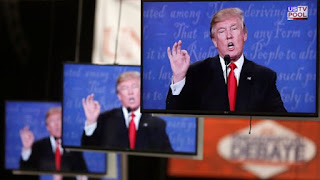 Jesus, this is getting monotonous. It's like watching the same soap opera over and over again. The media reports on something that Donald Trump doesn't like. He responds by calling them fake. He holds a press conference where he berates them to their faces and then holds a rally where he doubles down on his outlandish charges.

And around and around we go on this twisted merry go-round. Now he's resorted to banning certain news outlets from White House briefings. When does this nightmare end? Well, I've been thinking a lot about that very same question and I've come up with the only logical answer; the only one that has a chance of working.

Pull the plug. You heard right. The next time this administration holds a press briefing don't show up. Pull your cameras and your microphones from the White House. Let Sean Spicer talk to an empty room for twenty minutes. Breitbart and Infowars can dry hump his leg if they want. Who cares? And don't make the mistake of taking a copy of the minutes. Propaganda is propaganda. Don't devote even one second of programming to anything that he or his brownshirts have to say.

When he holds a rally, don't show up and cover it. He can spew all he wants to the dumb-ass minions who show up and froth at the mouth, but there's no need to give him a larger audience then he deserves. When he boards Air Force One, let him do it alone. He can bore the pilot to death all he wants with his conspiracy theories. There's no need for you to jot down every single syllable that comes out of his mouth. And when he heads off to Mar-a-Lago to play golf, as he has done every weekend since being sworn in, don't follow him onto the course.

The fact is that for all his personality quirks - and he has a shitload - the one thing this megalomaniac craves more than anything else is attention. He loves it, he needs it, even the negative attention. It gets his juices flowing. He's been fighting the whole world his whole adult life. He became the media mogul he is by manipulating the media and grabbing the headlines. He knows how to work the media better than anyone alive and now he is doing the same thing only with the Washington press corps.

Well it's time they stopped playing along. Look, they created this monster. Nineteen months ago when he announced he was running for president, the media made a calculated decision that he was good for their ratings. Les Moonves, the President of CBS, said this about Trump's candidacy, "It may not be good for America, but it's damn good for CBS." It was that mindset in the media that enabled Trump to get his message out to millions of people. By some accounts, he received as much as a trillion dollars of free advertising, more than twice the amount that Hillary Clinton, Bernie Sanders and the rest of the Republican field of candidates received as a whole.

CNN, CBS, NBC, ABC, MSNBC, they all brought this upon themselves, so I don't for a moment feel sorry for them. Campbell Brown, a former CNN news anchor, sounded the warning bell, but her words fell on deaf ears. And now this insecure, man-child is the leader of the free world. Maybe they didn't think he'd pull it off. Shit, almost nobody did. But that's still no excuse for how they drooled all over him.

So here's how they can redeem themselves, by taking away the very thing Trump loves the most: the spotlight. The way you deal with an egomaniac who loves looking at his own refection in the mirror is to remove the mirrors from the room. He loves hearing about himself on TV; even his own staff has said that he spends most of his free time - and by free time, I assume most of his waking hours - watching cable news. He's obsessed with CNN; they've become his favorite whipping boy so to speak. More than half his tweets are directed at them. What better way to drive him up the wall than to deny him the opportunity of seeing his magnificent reflection on the screen? Christ, it would be worse than watching a crack addict detoxing.

I'm being serious here. Things have gotten out of hand. We have a president who is openly hostile to the media, while at the same time craving its attention, and we have a media who is behaving like an abused wife who doesn't want to call the cops on her husband. Something's gotta give and it ain't gonna be Trump. Based on what we saw at the Nuremberg Rally, er, CPAC convention, the administration plans on stepping up its assault on the Fourth Estate. Détente is not in the offing.

Where is it written that the media is required to provide press coverage of the president? Since when did the term "alternative facts" become a legitimate talking point? When I was in school we had only one set of facts. Anything else was considered wrong. I could believe all I wanted that four plus four equalled nine, but if I put it on my paper, the teacher would put a red mark through the answer. That meant it was incorrect. If I had too many red marks on my paper, I got an F. There was no alternative reality in which I was really an A student with a teacher who just didn't appreciate my uniqueness.

And there is no alternative reality in which the White House is right and everyone else is wrong. The term for such thinking is called delusional. And the way you challenge a delusion is to not give voice to it. Providing a platform for Trump's paranoid world view not only gives him license to continue his wild machinations; it allows him to paint himself as a victim of some conspiracy to silence him and his supporters. We are already seeing this play out in the country. A recent poll showed that more people trusted Trump than the press 45 to 42 percent. If true, that is frightening.

Look, I get it. Cutting this president off is going to be extremely difficult. Like it or not, network news is now considered entertainment. That means it must produce a profit. And Trump, whatever else you may say about him, gets good ratings. But Bill Maher had a valid point on his show Realtime this past Friday. News as a percentage of revenue for the networks is very small, less than 4 percent overall. "Guys," he implored, "Take one for the team."