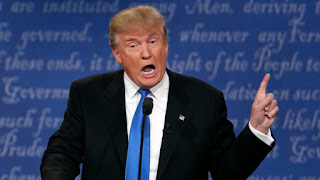 Okay, Hillary supporters, you can exhale now. She won the debate. No, she didn’t put Donald Trump away, but she did what she had to do: make the case for why she is ready to be commander in chief and, more importantly, make the case for why he isn’t. It took Clinton all of 12 minutes to get under Trump’s skin and once she did, the old Donald just couldn’t help himself. Not only did he take the bait, he swallowed it down willingly, like a child feasting on chocolate chip cookies.

What you saw out there were two candidates: one who was thoroughly prepared to debate and the other who wasn’t, and it showed. Team Clinton was determined this was not going to be a repeat of the Denver fiasco of 2012. Trump tried to roll out Dr. Jekyll; instead Clinton forced Mr. Hyde out of hiding. The only strong moment for Trump came when he hammered her on NAFTA and TPP, but in true form, he wasn’t able to sustain the attack; instead he spent much of the evening being on the defensive.

And that was by design. It was clear from the onset, Clinton wanted to set the tempo and she did. In fact, so effective was she that Trump, apart from the trade segment, never got any momentum going. In fact, as the debate wore on he seem to fade. His responses to questions about his birtherism claims, his refusal to release his taxes and his denial about his support for the Iraq War were not only ineffective, they seemed at times downright incoherent. And for someone who has spent the last few months questioning Clinton’s stamina, it was Trump who looked like he could’ve used a nap.

Clinton's biggest accomplishment last night was not allowing Trump to come off looking presidential, or to even come close. As I mentioned in my last piece, the bar was set so low for him that just stepping over it would’ve gotten him brownie points. Well last night he tripped over that bar, courtesy of a little shove by Clinton. And while I don’t think he lost any of his faithful minions, he failed to grow his base. She, on the other hand, was appealing to those suburban white women who were already apprehensive about Trump to begin with but not yet sold on her. Last night was her chance to say to them, “I’m not making this up, he really IS this ignorant.”

Howard Fineman called his performance "the worst ever in modern times." That might be a little bit of a stretch. I've seen quite a few doozies in my lifetime, but most of those debates were otherwise credible performances marred by critical errors. After the first 15 minutes, Trump started going downhill fast. He didn't so much implode as dissolve. If ever there was a case of Attention Deficit Disorder, this was it. I swear the man has Turrets Syndrome; I'll stake my life on it.

So now for the 64 thousand dollar question. Did she move the needle? In a word, yes. Maybe not - forgive the pun - bigly, but in a race that's this tight, even a two-point bump in the polls could be critical. Let’s not forget she’s up by one point in Colorado, two points in Pennsylvania and tied in Florida. A two point swing could mean the difference between a 300 plus electoral vote victory and a narrow electoral vote loss. Yes, it’s that close. And I would remind everyone, Barack Obama won Florida by less than a point in 2012.

We’ll have to wait a couple of days before the next set of polls comes out to see how effective – or not – Clinton was. If I have one complaint about her performance it was this: she did get a little too technical at times. Like most people who have the facts on their side, there’s a tendency to try to teach rather than converse with the audience. Clinton needs to keep that in mind in the second debate.  Also, since it's obvious Trump will hit her again with NAFTA and TPP in the next debate, she's going to have to come up a better answer than her husband created a lot of jobs in the '90s. She needs millennials to vote for her and most of them weren't even teenagers when Bill was in the Oval Office.

But unless I completely misread what happened last night – and that's always a possibility – I would expect her to reap the rewards of a well-earned victory when the next round of polls comes out. She isn’t out of the woods just yet, but at least the clearing is in sight.
2016 election Donald Trump Hillary Clinton politics Presidential debates Presidential polls