This Is An Outreach? 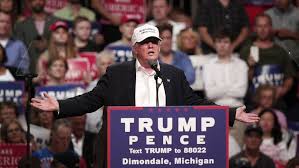 Every successful salesperson knows that the way you grow your business is by reaching out to new customers and giving them a reason to buy from you. You paint a positive image of yourself and create a value in the customers' mind that you are someone they can rely on. What you don't do is belittle them and then say what Donald Trump said to an almost completely white audience in Michigan.

In all the jobs I've had in sales over the years, not once has a manager every encouraged me to do what Donald Trump did in that speech. It runs counter to everything we know about growing market share in a particular industry. In fact, any company that were to employ this tactic would almost assuredly lose market share and put themselves in a very precarious position.

But let's cut to the chase here. Donald Trump was not "reaching out" to African Americans in that speech. The fact that he gave it in one of the whitest neighborhoods in Michigan is proof that none of this is about attracting black voters, or Latinos for that matter.

So who was the target? White suburban women, that's who. Even someone as obtuse as Trump knows there is no way he's going to make any serious inroads with African Americans or Hispanics. Xenophobic and racist he may be; stupid he is not. He can read polls. He may not like them right now, but he can sure as hell read them.

And right now the polls show he is getting trounced with respect to white suburban women, the kind that live in the suburbs of Philly and Akron and Cleveland and northern Virginia and Raleigh, North Carolina and South Florida and just about any place else where there is a fairly large suburban population. The way the race is shaping up, Trump is cleaning up in rural America and getting his clock cleaned in the cities. If he is to make up any ground, it has to come from those suburbs.

There is a certain percentage of white voters who are, less face it, racist. You see them at Trump rallies and Trump has done nothing to call them out or disown them. Just the opposite, in fact. He's ramped up his rhetoric so as to reassure that crowd that he is still their champion. That by itself is a political scandal and a national disgrace.

But there is another percentage of white voters - otherwise conservative - that are appalled at the racial overtones of his campaign and the obnoxious comments that come from his mouth. They do not wish to be associated with anyone perceived as being that racist. And right now those people - a majority of them women - are not voting for him. So Trump delivered a speech that to many blacks would seem insulting and demeaning, but to that target audience might be perceived as an olive branch of sorts. See, I care about blacks. I'm not a racist.

Will it work? For the most part, I doubt it. For one thing, that isn't the only reason those suburban women aren't voting for him. The way he and his surrogates are going after Hillary Clinton's "stamina" and "health" is pure sexist and quite frankly doesn't sit well with many of them. If you're going to make a pitch to suburban women that they should vote for you, you first have to prove you're not a misogynist pig before you can claim you're not a racist bigot.

And therein lies Trump's biggest challenge. He's pissed off so many potential voter demographics that even when he tries to mend fences with one of them, his campaign ends up digging the hole deeper with the others.  The sad truth is that Trump's speeches, despite how his campaign wants to frame them, are little more than dog whistles to the same mobs he's been preaching to since he got into the race last June. They will stick with him to the very, hopefully, bitter end.

The majority of the rest of the electorate, however, is unlikely to fall for his "outreach."
2016 election African American voters Donald Trump general election Hillary Clinton misogyny politics racism