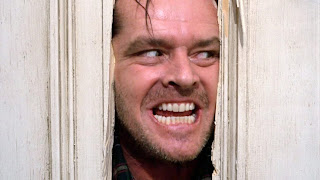 I'll be honest, I've used words like wing nut and batshit crazy unapologetically to describe far-right conservatives for years. It wasn't so much a medical diagnosis - I'm not a psychiatrist after all - as it was a political observation that I felt and still feel is justified. Seriously, how does any reasonably objective person listen to the likes of a Sarah Palin or Michele Bachmann and not come to the conclusion that they're a couple sandwiches short of a picnic?

But Donald J. Trump takes the cake. Shit, he takes the whole fucking bakery. Palin and Bachmann are rank amateurs next to him. For the last thirteen months the country has had a ring-side seat to the most unabashed, bizarre, unhinged behavior ever exhibited by a politician running for anything north of dog catcher.

David Brooks calls him a "man-child." I think that's being unfair to all the children trapped in the bodies of men and women, and, which I'm sorry to report, I occasionally behave like. Hey, I never said I was a gentleman or a diplomat. Catch me with my hair down and you'll get an earful of stupid but good.

I've made no secret that I once did my fair share of drinking. I don't anymore, mainly because when I did bad things would tend to happen. I go to a support group of people just like myself to make sure I don't forget who I am. These groups are instrumental in allowing me to "grow up" and become a more responsible person in society.

By no means is this process perfect. We are hardly saints, but we try our best. Someone once coined a phrase that perfectly describes us: we are ego maniacs with inferiority complexes. That may sound like a contradiction in terms, but it's really not. When you think about, it's the textbook definition of an addict. A person who needs to control his or her environment to overcompensate for feelings of inferiority. That is why people drink, drug, overeat, compulsively gamble, you name it.

That is precisely who Donald Trump is. He is an ego maniac with an inferiority complex.

Now not all addictions are physical. In other words, they all don't require the ingestion of a substance or actively doing something like gambling. For some addicts, it's all about power. When you think about it, power is the ultimate drug. Who doesn't want to be the master of his or her own universe? The world of politics and business afford people the opportunity to live out the ultimate dream: domination.

Trump is hardly alone when it comes to men looking to dominate their field. One of the greatest myths about capitalism is that it's about free enterprise. In actually, it's about market domination. Companies may publicly say that all they're looking to do is simply grow their market share, but privately their end game is to take over and control the market. Trust me, I have worked in several industries from banking to computers to home theater to security door hardware and in each one of those industries there has been a dramatic consolidation of that market as smaller companies were bought out, i.e., acquired, to form larger, more powerful ones.

The moral of the story is that, in America, size matters. You're taught about the American dream in school and that all you have to do to realize it is to work hard. But then you find out that the reality is far different. It isn't about getting your fair share; it's about screwing the other guy before he screws you. Absolute power corrupting absolutely, sadly, is the engine that drives the U.S. economy.

Donald Trump grew up in that environment. He learned how to game the system in a way few could only contemplate. He made his fortune - such as it is - on the backs of people who never saw him coming. He became a success by rewriting the rules to suit his own agenda. And he did it without hesitation, free from any burden of responsibility for the pain he might be inflicting on others. And when his plans didn't work out, he left his investors holding the bag while he hid under the bankruptcy protection laws of this country. FOUR TIMES! His excuse? He was simply taking advantage of the rules. It's not his fault.

It never is with Trump. Think about it. There was no one to reign him in during his formative years, no one to hold his feet to the fire and say, "You're wrong." The thought of Trump making an amends to someone is laughable. People have lamented about his lack of empathy and his inability to apologize. How can a person empathize or say I'm sorry when they seriously believe they have never been wrong or made a mistake? I cannot begin to imagine what it must be like to think I'm perfect, but for Trump, it's axiomatic. The man is his own god.

When you combine his maniacal quest for power, his unwillingness to allow anyone in that could challenge his preconceived notions or beliefs, his incapacity for self reflection and his thin-skinned hypersensitvity, you have a disaster in the making. This man is looking to become leader of the feee world and he exhibits all the personality traits of a Charles Manson with a fountain pen. He boasts about what he would do on his first day as president. I and millions of people shudder at the mere thought.

He doesn't belong in the Oval Office; he belongs in a psychiatric facility. Or perhaps a good 12-Step program. Either is preferable to the White House.