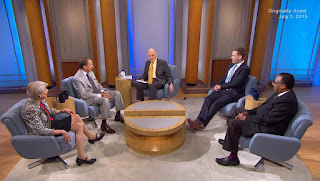 When I heard the news of John McLaughlin's passing, I was saddened but hardly surprised. Over the last few months it was obvious McLaughlin's health was failing. It wasn't just his age; he seemed frail, his voice strained, and that vaunted McLaughlin wit seemed to betray him at times.

Ironically, it was my wife who first noticed his decline last December. Being a long-time admirer and viewer of the show, I guess I hadn't picked it up. Or maybe I didn't want to. The man had been such an integral part of political discussion, I couldn't bring myself to admit this legend was entering the twilight of a brilliant career.

I made it a point to never miss a Mclaughlin Group show, except last Sunday. I had to pull double duty at my church so I wasn't able to watch it. I thought about DVR'ing it but elected not to. As it turns out, McLaughlin was gravely ill and couldn't do the show; the first time in 34 years he was unable to perform his duties. He did a few voiceovers that without captions were completely unintelligible. The show was taped on Friday. By Tuesday he was gone.

Gone, but not forgotten. I will miss him, as will the world. Yes, he was a conservative, but what I appreciated most about him was the way in which he gave equal time to both sides of the political spectrum on his show. He pulled no punches and held back nothing. The word ambivalent was not in his vocabulary. And while the people who comprised his panel - people like Pat Buchanan, Jack Gerrmond, Eleanor Clift, Jeff Barnes, Clarence Page and Mort Zuckerman - often went at it in heated and passionate exchanges, never did the discussion descend into personal attacks. You always had the sense that everyone on the set respected one another. Put another way, McLaughlin wouldn't allow it.

I had been a fan of the show from its early days. It, along with Agronsky and Company, in many ways informed my opinion of Washington politics in the '80s. While I always considered myself a liberal - and still do - shows like The McLaughlin Group were essential in helping me understand how the other side felt. To this day, I am astounded at how narrow-minded some liberals are. In many ways they are as thick headed as their conservative counterparts.  I make no apologies for the way I went after many Bernie supporters throughout the Democratic primaries. I detest bubbles regardless of their ideological leanings. It was people like John McLaughlin who helped me appreciate that a hundred and eighty degrees from wrong was still wrong.

So who will assume the mantle that Mclaughlin has left behind? No one, that's who. I can't think of a single person worthy of sitting in that chair. He didn't just moderate a talk show, he invented the whole damn medium. To the extent that we now have political talk shows, we can thank McLaughlin. The best eulogy we can give him is to acknowledge his incredible contribution and give him a heartfelt sendoff.