It Was A Helluva Week for the Dems. Will It Be Enough? 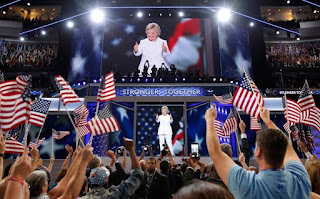 Let's be clear. Hillary Clinton is no Barack Obama when it comes to giving speeches; she's not even her husband. Last night, though, she didn't have to be. That's because Obama, Bill and host of other speakers laid the groundwork for her throughout the week. All she had to do was not drop the ball. And in that respect, she certainly held up her end of the bargain.

Regardless of your political leanings, last night was a historic moment for the country. The first woman presidential nominee on the heals of the first African American presidential nominee. Maybe the nation is deeply polarized, but enough of it has seen fit to drag itself forward. And that, more than anything else, is where the Democrats will pin their hopes this November.

Looking back at the week, what impressed me most was how well organized and disciplined this convention was. Compared to the train wreck we saw in Cleveland last week, this week was like Henry Ford's legendary assembly line, with every speaker performing an invaluable function.

I thought going in that the Democrats - and by extension, Hillary - needed to accomplish three things: First, make Trump look completely unqualified for the presidency by pointing out how erratic and temperamental he is. Second, give voters an optimistic, but also realistic, image of America, one that fully acknowledges its problems while at the same time offering hope that those problems can be solved without divisiveness and hatred. And lastly, make the case that Hillary is up to that challenge; that she can be trusted to lead the country.

Call me optimistic, but I think they may have succeeded in all three. But there was one additional thing that needed to be accomplished and, to her credit, Hillary did it. Her speech, perhaps one of the best she's ever made, needed to tackle that eight-hundred pound gorilla that was still in the convention hall. The Bernie Bots still needed some convincing. They weren't sold, not yet at least, and Hillary's job last night was to seal the deal.

So, yes, it was a progressive speech, far more progressive than Obama's or Joe Biden's or even the one she probably would've preferred to give. It needed to be. Look, she'll never be Bobby Kennedy in a pants suit. She can't be; it's not in her DNA. She'll always be Bill's wife when it comes to her political instincts. She's a hawk, and with everything that's going on in the world today, that might actually help her in this election.

But on every other issue that counted, Hillary needed to accept a staggering reality: she might've won the primary battle, but Bernie and his supporters have won the cultural war. Give her credit for sensing that and for doing what she needed to do. Will her overtures be enough to sway them? For most, I think so. There will still be those who would rather set themselves on fire than vote for her, but in an election that might well hinge on a couple million votes, Hillary could not afford to let pass the best opportunity she was going to have to pull as many of them off that fence as she could.

The polls should be coming out soon, maybe as early as today or tomorrow. Anything less than a 3 or 4 point bounce will spell trouble for her. If the RCP average has her tied with Trump or, worse, still has her trailing him a week from now, Democrats will start to worry, and rightly so. But I think she'll do okay. I think this week was one of the most crucial weeks for the Democratic Party quite possibly since 1932. I'm serious; that's how much is at stake.

It all comes down to this one question: will the Democrats' message of hope trump the Republicans' message of doom and gloom? If the answer is yes, Clinton will win; if it's no, Trump wins.