A Pontiff For All Seasons 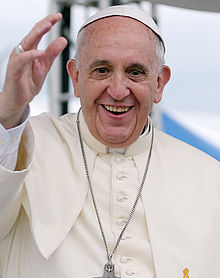 I've thought long and hard about what it is about this Pope that seems to drive conservatives up the proverbial wall, and I know what it is.

Pope Francis gets it. All of it. This Pope understands what it truly means to be a Christian. It is not an easy walk. It requires humility, compassion and a profound understanding of what it means to be a Shepard for the lost the way Jesus was during his brief ministry on Earth. On our best days all of us barely register a 3 or 4 on a scale of 1 to 10. Imagine what our worst days would look like.

Like Christ, he is not ashamed to wash the feet of inmates. He shuns all outward signs of excess, moving out of the spacial papal apartments and into the Vatican guest house. Guest house? The Pope in a guest house? At night he sneaks out to be with the homeless. On his visit to New York, he got out of his Pope mobile to bless a disabled child on the road. Can't you just see in your mind's eye Jesus doing the same thing.

For this ex-Catholic, these last few months have been extraordinary. I never believed I would see in my lifetime a Pontiff so humbled by his position so as to exhibit such traits. And yet here he is among us, not Jesus incarnate as some have foolishly said, but Jesus personified. A true servant of the people.

His critics - all of them conservative - have accused him of mingling in things he knows nothing about. He should stick, they say, to matters of morality and leave economics and the environment to those best suited to handle such matters. Like that's really worked out well.

But Pope Francis is having none of that. To him, economics and the environment are moral issues. How we treat those less fortunate, goes to the heart of who we are as Christians.  How we treat the world that we have been given, speaks volumes about our ability to be good stewards. I submit that with regard to both we have have been dismal failures. Millions suffer needlessly while a few enjoy untold riches; and slowly but surely we are destroying this planet. The Pope is warning us that there will be a price to pay for such sins.

Perhaps if this Pope had come out railing against homosexuality and abortion, his critics would've been mollified. No doubt they would've stood up and applauded him for being a righteous man of God. But when he speaks about poverty and global warming, he is somehow neglecting his papal duties and abandoning the teachings of Jesus.

There is of course one tiny problem with their logic. It just isn't true. The Jesus they refer to doesn't exist, except maybe in their warped brains. They keep looking for the passage where Jesus commands his disciples to go pull themselves up by their own boot straps. There is no such passage. Just like there's no such passage that reads God helps those who help themselves. Indeed just the opposite; scripture is replete with commands that we are to live out our faith through our actions toward one another. As it is written in James,

Suppose a brother or a sister is without clothes and daily food, If one of you says to them, "go in peace; keep warm and well fed," but does nothing about their physical needs, what good is it? In the same way, faith by itself, if it is not accompanied by action, is dead.


The Christian faith is not a self-help group. Our role is not to be bystanders while the world around us  is in need. Rather, our faith demands that we put our money where our mouth is. As Jesus himself said in Matthew, "Whatever you did for the least of these brothers and sister of mine, you did for me."

Pope Francis takes these words to heart and he challenges all of us to put them into practice. Like Jesus before him, he rattles the cage and reveals the hearts of the cold and indifferent. He speaks out against crony capitalism and greed, calling it the "dung of the devil."


That might be the most accurate critique of trickle down economics that I've ever heard. But he didn't stop there. In an address to Congress this week, he took aim at what Dwight Eisenhower once referred to as the military industrial complex.


On the topic of immigration, the Pope had some stinging rebukes for the xenophobic elements that are gaining momentum within the United States.

"The people of this continent are not fearful of foreigners, because most of us were once foreigners. When the stranger in our midst appeals to us, we must not repeat the sins and the errors of the past. We must resolve now to live as nobly and as justly as possible, as we educate new generations not to turn their back on our neighbors and everything around us. Building a nation calls us to recognize that we must constantly relate to others, rejecting a mindset of hostility in order to adopt one of reciprocal subsidiarity, in a constant effort to do our best. I am confident that we can do this."


Small wonder conservatives in this country are having a cow over this Pope. He's had the audacity to unmask their false god of money and expose their racism. And just like the Pharisees of Jesus' time, they aren't taking it well.

Some of the comments from the far Right have been downright repulsive and disgusting, but hardly surprising. I have known for quite some time how vacuous this movement really is, and now, thanks to this former Jesuit priest, hopefully everyone else will know it too.

With all the riches that this world has to offer, it is nothing short of an embarrassment that any one should starve for lack of money to buy food. As Christians, all of us should be ashamed that such atrocities still exist and all of us should take heed of the Pope's charge to us to do something about it. As Jesus said in John 13,