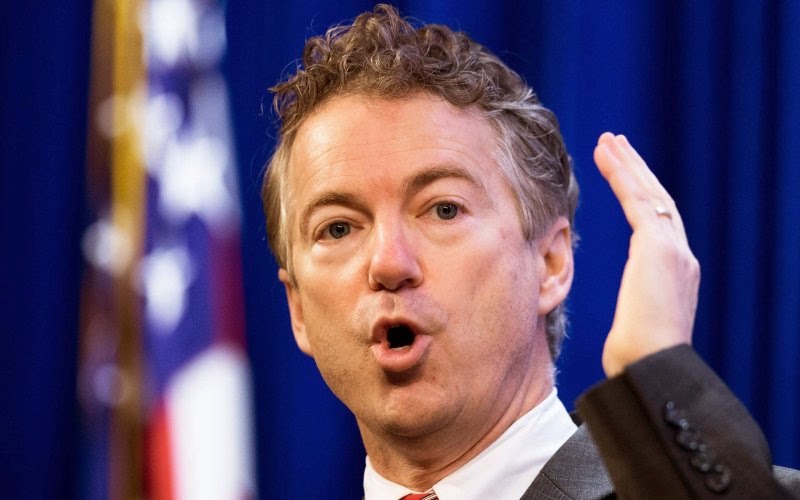 Last week's announcement by Ted Cruz that he is running for president in 2016 should come as no shock to anyone who was paying attention to the first term senator from Texas. He's been building up to this moment from the time he arrived in Washington. His hatred for the establishment is matched only by the enormity of his ego. And he's so obviously transparent, he's the only person I can think of who can make Mitt Romney look genuine.

But while most pundits spent the whole week speculating on his chances for locking up the Republican nomination - I'll spare you the trouble, slim to none - the guy flying under the radar who hasn't gotten nearly enough attention is the one who just might end up squeaking by: Rand Paul.

I'm serious. Rand Paul could well be the random element that takes everyone by surprise. Jeb Bush still has a huge disadvantage to overcome. He's despised by the far Right - I mean REALLY despised by the far Right. How much? If Obama is a 10 on the loathing scale from 1 to 10, Bush is about a 6 or 7. Among the Mark Levin lot, he's about a 9. Embracing immigration reform and Common Core has so badly damaged him within this lot, most have said they would rather stay home than vote for him in 2016, thus securing a Hillary Clinton landslide. I don't really buy this narrative. My gut tells me if Jeb wins the nod, they'll turn out in droves to keep another Clinton administration from taking office.

But that doesn't mean they aren't going to do their damnedest to ensure old Jeb doesn't get the chance to beat Hillary. The movement against him will be formidable. Indeed the only hope he has of winning the nomination is if too many far-right candidates end up canceling themselves out. That might end up happening. If Cruz ends up going up against Mike Huckabee and Rick Santorum, the three of them could slice up the pie so thinly, Bush wins by default.

But if Marco Rubio follows through with his plans to enter the race, he, along with Scott Walker, could equally split the establishment vote, allowing Paul to emerge as the likely benefactor. I know a lot of people don't consider Walker an establishment candidate, but, trust me, compared to Cruz, Huckabee and Santorum, he's practically Dwight Eisenhower.

Paul is well respected by most Republican voters. With the exception of the neocons, he's seen by many in the party as a serious candidate. His message of government bad, private sector good, resonates with the Tea Party.  And he's enough of a social conservative to mollify the Christian Right. While he may not win Iowa - big deal - he could win New Hampshire and a good many other states.

And, unlike Cruz, he isn't nuts. In fact, he's one of the few GOP candidates who crosses several important demographic lines. His stance on the drug war is practically revolutionary and has earned him high praise from liberals who have been advocates for legalizing marijuana. He's also been a huge critic of American foreign policy. Like his father, he's weary of the country's interventionist policies both in the Middle East and throughout the world. That makes him popular among many young voters who also are critical of American foreign policy, not to mention the whole government email spying controversy.

Can you envision a foreign policy debate between Paul and Clinton in which Paul is the dove and Clinton the hawk? I can, and don't think for a moment that there aren't more than a few Democratic leaders who are concerned about that scenario enfolding. The far Left already has its reservations about Hillary. Paul could appeal to them on a visceral level. If he manages to convince say five percent of them to either vote for him or simply stay home, that could spell the difference in the general election.

Scoff if you will, but as of right now, Rand Paul is the best chance the GOP has of winning the White House in 2016. Jeb is damaged goods; Cruz is too crazy even for Republicans; Rubio shot himself in the foot when he sponsored that Senate immigration bill; and Walker reminds me of Tim Pawlenty.