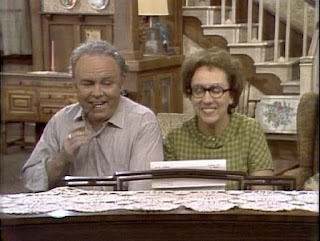 Jean Stapleton died this past Friday at the age of 90. She was best known for her role as Archie Bunker's "dingbat" wife, Edith, in the seminal sitcom, All in the Family.  If you recall, the show's opening theme song, "Those Were the Days," was sung by Carroll O'Connor and Stapleton:

Boy the way Glenn Miller played
Songs that made the Hit Parade
Guys like us we had it made,
Those were the days.

That song has been rolling around in my head lately. I couldn't figure out why. And then it hit me: "guys like us." That's it. That's been it from day one.

I now know why Barack Obama has been driving so many people up the proverbial wall since he took office. It's not his policies - socialist, my ass; and it certainly can't be his intelligence - especially after having survived Mr. Hooked on Phonics for eight insufferable years.

It's because of what Obama represents: the end of an era. Guys like the ones mentioned in that song really did have it made. They had everything. Jackie Robinson changed some of it, but just the complexion. The owners, the managers, the power structure, all remained firmly in the grips of the white establishment, particularly the while male establishment.

The Archie Bunkers of the country could always count on two things: they would always be number one and that number two would always know his place. I can only imagine the shock these xenophobes must've experienced the moment they saw Obama emerge on that stage in Chicago on election night 2008, knowing their world had just come crashing down. Not only weren't they number one anymore, but number two just told them where they could stick their Dewey decimal system.

There has never been anything even remotely like what we've seen in America these last four and a half years. The rhetoric has been beyond belief. Up is down and down is up. This isn't just your basic racism at work; it goes a lot deeper than that. What we're witnessing here is nothing less than the beginnings of a total transformation in American politics. A transformation that, to my way of thinking, is long overdue.

But while some of us applaud it, there are those who are deeply contemptuous and fearful of what it will mean to them. Like the dinosaurs that lived 65 million years ago, these fossils will soon become extinct. But not before making total fools of themselves and, in so doing, drag the country they all claim to love so dearly to hell and back.