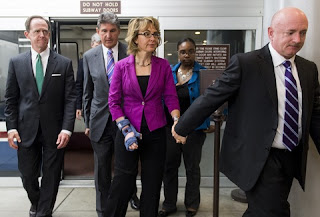 Let's be honest, was anybody really all that surprised that the background check bill went up in a proverbial puff of smoke? Even if it had managed to get the 60 votes needed to avoid a Republican filibuster, the House, in all likelihood, would've killed it or ripped what little was left of it to shreds. Even intact, it was a watered-down billed, flawed and not nearly bold enough to tackle the enormous problem of illegal guns in this country.

I read Michael Tomasky's piece in The Daily Beast and I agree; it was a shameful day in the Senate for both Republicans and Democrats. But, if I may be allowed to go off on a tangent, that's not why this bill failed. And why others like it will in the future. It's not because of a few cowardly Dems - one of whom isn't even up for reelection until 2016 - or a broken political system that has rendered the entire Senate unable to pass a ham sandwich which caused the background check bill to fail; it's because for the better part of two centuries, we've allowed ourselves to be hoodwinked into accepting the idiotic premise that the Second Amendment somehow gives unfettered rights to every gun-toting hick in the country irrespective of circumstances. Nothing could be further from the truth.

In the first place, the Bill of Rights is NOT absolute and never has been. Even the most precious and sacred of these rights - the freedom of speech in the First Amendment - has its limits. One cannot liable or slander someone's reputation or shout "fire" in a crowded movie house. To do so would mean severe penalties, financially, perhaps criminally. Most people get this, even so-called Constitutionalists who love to preach about the good old days when government was actually small enough to drown in a bathtub.

Of course all that goes out the window the minute the Second Amendment is brought up for discussion. Attempting to impose what some would call common-sense reforms is akin to a vampire staying up late to watch a sunrise. Even reading the damn thing gives one a headache:

A well regulated Militia, being necessary to the security of a free State, the right of the people to keep and bear Arms, shall not be infringed.

You figure it out. What did the framers intend when they wrote that? Were they referring to militias, which in the late 18th century was about the only defense the nation had against a foreign invader? Most people don't even know that the U.S. didn't have a standing army until the late 1800s. Even the Civil War was fought primarily with state-run militias.

Given that, it's highly unlikely that the "people" mentioned in this amendment are civilians in the usual sense. What is more likely is that the founders intended these militias to have access to the Arms necessary to, if needed, defend the homeland and that no act of Congress could deny them that access.

That seems like a reasonable take. But let's be polite here and play devil's advocate for a minute. Let's assume that the founders were intending to paint a much broader stroke with this amendment. The question then comes down to one of degree. Is this right absolute? Again, based on what we know of the First Amendment, the answer is undoubtedly no.

And that's where the breakdown occurs and why it has been so incredibly difficult to pass meaningful gun legislation. Even those who are moved by the tragedy in Newtown are reluctant to openly question the "sanctity" of the Second Amendment. From Joe Biden to Joe Manchin (the co-author of the background check bill) to Gabby Giffords, all went out of their way to defend the rights of gun owners and make abundantly clear to everyone they could that they were pro Second Amendment.

And what did they get for their efforts? A staggering defeat at the hands of the NRA. The simple fact is that the moment they conceded the infallibility of an amendment few truly understand, their goose was cooked. Think about it for a moment. If the Second Amendment is absolute, and you believe it to be, then any limits on it by definition is a contradiction.

But if you start from the premise that the Second Amendment does NOT guarantee the right of everyone to own a gun, much less a true weapon of mass destruction, you can reframe the whole argument on your terms. You still may not win the first few times around, but eventually enough people will start to come around and you'll prevail in the end.

It must start with educating people. The country desperately needs to have an adult conversation over its preconceptions about and love affair of guns. That's the debate we should be having; not how many clips one can legally purchase or where and from whom one buys a weapon.

Until and unless we have that debate, America will continue to be a violent nation and the next lunatic in waiting will get the chance to murder yet more innocent people.