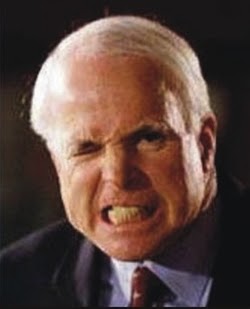 Ever since John McCain got mugged by George Bush in the 2000 Republican primary, he hasn't been the same man. What the Viet Cong weren't able to do to him, gutter politics finally managed to. He became bitter and increasingly insular in his demeanor. It was like watching a kid who finally found out that Santa Claus wasn't real.

Since then, you could say McCain has had a rather eccentric run, politically speaking. He reached across the aisle and co-authored the McCain - Feingold Act of 2002, which stood until Citizens United struck it down. He supported Bush in his reelection bid in '04, which stunned every one close to him, and became one the strongest advocates of the Iraq War.

He surprised everyone during the '08 Republican primary by running to the center of every other candidate and prevailing. Those of us who'd watched him in 2000 quietly wondered whether the old man could recapture some of that magic he had back then. All that went out the window when, just days before the Republican National Convention, McCain chose as his running mate Alaska governor Sarah Palin. Palin wasn't just unqualified for the office she was running for, she was an affront to anyone with more than a 5th grader's intellect.

That move alone should've landed him in the Idiot's Delight Hall of Shame. But, being the kind soul that I am, I was still willing to give the man a mulligan - albeit a rather large one.  After all, who could've predicted that Caribou Barbie would stick around this long? McCain may have been responsible for thrusting her onto the national stage; it was the numb nuts at Fox News and A.M. radio land that kept her there. Stupid gets as stupid wants.

Not even his grudge match with Chuck Hagel over the surge in Iraq during the recent confirmation hearings surprised me. These days I just figure it's the stated position and obligation of every Republican to be a dick whenever possible and vote against anything this President wants. If anything, given the other Republicans' conduct - most notably Texas Senator and Joe McCarthy admirer Ted Cruz - McCain comported himself reasonably well, that is for a miserable miser.

Which brings us to his latest stunt at a recent town hall meeting and the reason for this piece. For it was at this very event that the wheels finally came off for McCain and his last shred of decency vanished with what was left of his reputation.

The mother of a young man who was shot to death in the Aurora, Colorado massacre only a few months before the Newtown shootings asked McCain whether he supported a ban on assault rifles.

Now imagine you're on that stage and you're being asked that question by a still grieving mother. What would be your response? Maybe something like, "I'm so very sorry for your loss, and I can assure you that all of us in the Senate and House will do everything possible to make sure these senseless tragedies don't happen again." Sounds reasonable to me.

Unfortunately this is what McDickhead said:

"I can tell you right now you need some straight talk. That assault weapons ban will not pass the Congress of the United States."

Now to be fair to McCain, he did offer his condolences for her "sacrifice," which some of the media outlets omitted in their reporting. But not even Charlton Heston would've been that crass. Straight talk? Are you f***ing kidding me?

I give up on this guy. There are only so many mulligans you can dole out in one lifetime. Whether it was his prisoner of war days, the way he was fucked over by the Bush campaign in 2000, or maybe something in the drinking water in Arizona - you look at Jan Brewer and tell me she looks normal to you - whatever. I'm done making excuses for someone who's about at clueless as Chief Inspector Clouseau chasing the Pink Panther and as angry as Bobby Knight on the losing end of an NCAA tournament match.

Not even his work on an immigration bill with Democrats can excuse his bizarre behavior. If anything, McCain's willingness to bend on what was fast becoming an albatross for his party is nothing more than good old fashioned survival instincts coming to the fore. He learned that much from George Bush, at least.

The man isn't a maverick. He's a bitter grumpy old prick and a shell of what was once a pretty damn good senator who got his ass kicked and has spent the last thirteen years returning the favor to any and all who managed to get in his cross hairs.
assault weapons ban Chuck Hagel George Bush John McCain Sarah Palin town hall