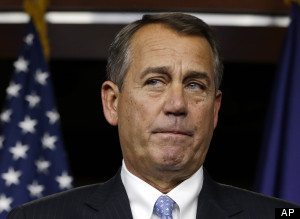 John Boehner's attempt to box President Obama into a corner has not only failed, it has had the unintended consequences of reducing the Speaker to a dead man walking. So much for stealing thunder.

Last night, Boehner called for a vote on his ill-fated Plan B, which, had it passed, would've extended the Bush tax cut rates for everyone under $1 million, thus putting congressional Democrats and Obama on the hot seat.

But pressure from the far Right all but killed the vote before it even had a chance to come to the floor. Boehner now knows that, if he expects to avoid going over the fiscal cliff, he has no choice but to accept a bill that Democrats will support.

Obama now has the leverage back that Boehner's stunt had threatened to snatch away.  He should use it. He has been more than magnanimous in putting entitlements on the table and agreeing to extend the Bush tax rates up to $400 thousand instead of $250,000. In every way imaginable he has been the adult in the classroom, while his counterpart has been unable or unwilling to lead his caucus towards a workable solution.

The time for future concessions is over. The President must make it clear to the Speaker that the deal that is currently on the table is as good as it will get. After January 1st, the offer will be significantly worse.  Whether John Boehner survives as Speaker of the House remains to be seen.  After yesterday's epic failure, I give his chances at no better than 50/50.

But this much is certain: In ten days an awful lot of bad things will happen all at once.  That scenario must be avoided at all costs.
Bush tax cuts Democrats fiscal cliff John Boehner Obama Republicans