Well, you'd be wrong, because this month's winner of the Idiot's Delight award nailed it perfectly.  As you will see, this boob is truly one for the ages. 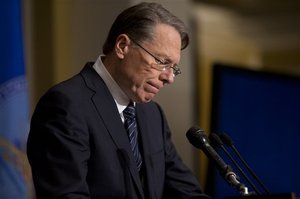 Wayne LaPierre, executive vice president of the National Rifle Association:  With all the callousness of a person rubbing salt on an open wound, this moron, exactly one week after the heinous act at Sandy Hook Elementary School, insulted not only the intelligence of a nation, but the dignity of each and every family devastated by the loss of their loved ones.

At a press conference, LaPierre had the nerve to say that more guns, not less, was the answer. He called for armed police officers in every school in America, ridiculing the very idea of gun-free schools.  "The only thing that stops a bad guy with a gun is a good guy with a gun." Apparently, LaPierre forgot that Columbine had an armed security guard and Virginia Tech had its own police department.

Back in the early 1970s, the seminal sitcom All in the Family, dealt with the issue of gun control in a now famous and, eerily, all-too-familiar scene in which Archie Bunker, responding to an on-air editorial he didn't like, came up with what he thought was the perfect solution for skyjacking: "All you have to do is arm all your passengers...The airlines wouldn't have to search the passengers anymore. They just pass out the pistols at the beginning of the trip and pick 'em up at the end. Case closed."

One could excuse Archie Bunker for being so stupid and ignorant - this was after all a social satire sitcom - but even an executive of one of the most powerful lobbyist groups in the country should have enough intelligence to know that the problem is that there are entirely too many people who have legal access to weaponry that has no place in civilian society.

The idea that the Second Amendment is an absolute right is absurd.  Even the First Amendment isn't absolute. One is not allowed to shout "fire" in a crowded movie theater, or defame someone's reputation and then hide behind a supposed freedom of speech.  A church may not engage in any behavior which is harmful or deadly (e.g. Jim Jones) to its congregants under the auspices of freedom of religious express.  And no newspaper may print material which is deemed as a threat to national security because of freedom of the press.

If there are limits as to what constitutes freedom for our most cherished of rights, isn't it reasonable to expect that the same should apply to gun ownership?  I seriously doubt that the Founders intended the Second Amendment to be taken carte blanche. There is simply no need for anyone to possess a weapon which has a capacity to fire 100 rounds of ammunition a minute. A simple handgun with a capacity to discharge 10 rounds or less is more than sufficient to protect oneself.

And while I don't expect the Wayne LaPierres of the world to understand that reasonable argument, I do expect them to have a little more couth and class, especially given the magnitude of the tragedy. His speech was inexcusable.  Period!

Calls for gun control - long overdue - have flooded the op-ed pages of numerous newspapers.  The President has dispatched Joe Biden to come up with legislation that can begin to effectively quell the outbreak of these mass murders. Public polls overwhelmingly show support for a ban on assault rifles and semi-automatic guns. Now is not the time to throw more fuel on an already out-of-control fire.

How much more innocent blood must be spilled before the nation finally puts the NRA and its henchmen in their place?
Archie Bunker gun control Newtown NRA Sandy Hook second amendment

steve said…
Yeah. And why not arm the 6-yr-olds while we're at it? (Think of how many massacres could be avoided-- along with homework, washing behind the ears, and spinach.)

The NRA had a good opportunity to come to the bargaining table as an adult. Instead, like the Tea Party, they've relegated themselves to the kiddie table.
December 23, 2012 at 3:25 PM