Brain Freeze: The Right's Denial Over What Happened Election Night 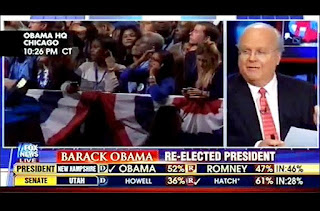 There were many memorable moments that occurred election night, but none more satisfying than watching Karl Rove's meltdown on Fox News when that network made the announcement that Barack Obama had won Ohio and, along with it, reelection to the presidency.  It was, in a word, priceless.

Rove could not bring himself to accept that, despite the hundreds of millions of dollars he, Dick Armey, the Koch Brothers and Sheldon Adelson had poured into this campaign, Obama was still going to prevail.  All that money for naught.  Maddening!

Rove wasn't the only one who was having a hard time coming to terms with reality.  For the last few days, the Right has been simply beside itself attempting to reconcile the "unthinkable." They had all but assured not only themselves, but their minions, that "the anointed one" would soon join the ranks of other, failed one term presidents like Jimmy Carter and George H.W. Bush.  Mitt Romney would win in a landslide. They had no doubts about it.

So, naturally, when the expected landslide did not happen, there had to be a logical reason.  As you would expect, it didn't take long for the "logical" reason to materialize.  And you'll never guess what it was.  Their base stayed home.

Yep, the old "he wasn't conservative enough" line.  I was wondering how long it would take for it to grace us with its appearance. For the record, less than 24 hours, about the same amount of time it took to throw John McCain under the bus in '08.

In a nutshell (pun intended) Mitt Romney, after running as far to the right as any presidential nominee since Barry Goldwater, lost to Barack Obama because his base didn't think he was conservative enough to suit their tastes. So, to punish him and the Republican gods, they stayed home; well, at least three million of them did.  Which, as it turns out, happens to be almost the exact margin of Obama's victory.

Of course, other, more plausible, explanations were quickly dismissed.  Such as, Romney lost the moderate vote, or maybe his party's views with respect to women and minorities alienated a good portion of the electorate, many of whom ended up voting for Obama.  Nah, that couldn't be it.  Why spoil a perfectly good rationalization with something as sobering as facts?  Especially when those facts contradict the narrative that they have carefully woven into the fabric of their own private Idaho.

Yes, it's quite possible that three million conservative voters did indeed stay home out of spite. Maybe they knew deep down what everyone else with half a brain knew all along, that Mitt Romney was as two dimensional as a cardboard cut out.  That's hardly the point.

What the Right and the Republican Party fail to realize and need to come to grips with is that they have become a white man's only club.  Their policies have done little to broaden their base; indeed just the opposite.  By taking such extreme positions they have dug themselves a huge hole that is becoming increasingly harder to climb out of.  In short, their message isn't resonating with the right kind of voters.

Consider this: In 2004, George Bush captured 44 percent of the Latino vote.  By comparison, Mitt Romney got only 27 percent. Of the almost 120 million people who cast their votes this past Tuesday, 10 percent were Hispanics.  That's 12 million potential votes.  Had Romney just equaled Bush's numbers within this demographic he would've netted an extra 2 million votes in his column, thus snatching 2 million votes from Obama's, and more than likely the presidency.

It gets worse.  When you factor in the steady increase within both the African American and Hispanic communities, you start to get at the real problem that besets the Republican Party.  Their base, as a percentage of the population, is shrinking; conversely, the Democratic base is increasing.  To quote Bill Clinton, it's basic arithmetic.  If this trend keeps up, the GOP will become a minority party within a few presidential cycles.

But, rather than wake up and smell the caffeine, conservatives are doubling down on their denial. The battle hymn of the wingnuts was at full volume. "We need more real conservatives." "To hell with the moderates." "Compromise is not in our vocabulary." And that was just from Mark Levin.

The bile and venom that is coming out of this lot is both sad and frightening.  Not only have they convinced themselves that a lie is the truth - Mitt Romney lost because white people didn't show up for him - but they have completely written off any hope for survival by demonizing the very groups that could actually prevent them from becoming extinct. Without quite realizing it, by insisting that brown and black people voted for Obama simply because they want free stuff, the likelihood is they will continue to decline as a political force in this country.

And that prospect isn't sitting too well with a number of more reasonable (i.e., sane) conservatives.  David Frum hasn't been shy about his sentiments. This is what he wrote in The Daily Beast:


Those who would urge the GOP to double down on ideology post-2012 should ask themselves: would Republicans have done better if we had promised a bigger tax cut for the rich and proposed to push more people off food stamps and Medi­caid? Would we have done better if we had promised to do more to ban abortion and stop same-sex marriage? If we had committed ourselves to fight more wars? To put the country on the gold standard? Almost half of those surveyed on voting day said they wanted to see taxes raised on Americans earning more than $250,000. Exit polls do tend to oversample Democrats, but the tax result is consistent with other polling that has found that even Republicans would prefer to raise taxes on the rich than see cuts in Medicare.


He wasn't done there.  On MSNBC's Morning Joe he expounded a bit further:

“Republicans have been fleeced, exploited and lied to by a conservative entertainment complex...there are too many to name.  Because the followers, the donors and the activists are so mistaken about the nature of the problems the country faces...just a simple question, and I went to Tea Party rallies and asked this question, have taxes gone up or down in recent years? They can't answer this question. The people who put the cement shoes on Romney's feet are now blaming him for sinking.”

Any successful business knows that if it doesn't expand its market share, it will inevitably go out of business. It is an established axiom. At this moment in time, the Republican Party is planning its own fire sale.

All dictatorships founder when they start believing their own propaganda.

What was so fascinating about Rove's tantrum on Fox was that here is the station that claims to be "fair and balanced" allowing the GOP kingmaker to dictate on air what they can and cannot say in calling an election. Could you imagine any reputable news station doing that? No, they would have cut to a commercial and, presto, the guest would have disappeared.
November 9, 2012 at 11:10 PM