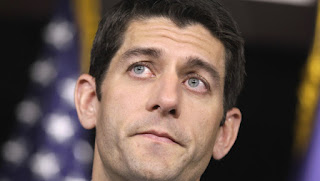 It hasn’t even been a week since Mitt Romney introduced Paul Ryan as his running mate and already many Republicans are running for the hills.  While publicly they are all saying wonderful things about the pick: brave, bold, daring; privately they are conceding the fact that Ryan’s presence on the ticket all but assures Obama of reelection.

In an op-ed piece for both The Daily Beast and CNN, David Frum writes,

The first battle in every election is the battle to decide what the election is about. What's the question voters must answer?

You'd imagine that Romney's job was to refuse the Democratic invitation, to choose his own ground for the election, and to keep his distance from the congressional GOP. You'd imagine, but you'd be wrong.

Romney has instead chosen to bolt himself to the House Republicans. He has chosen as his running mate Paul Ryan, the House Republican leader -- not their formal leader, but their intellectual leader, the person who set their agenda. He has effectively adopted Paul Ryan's agenda as his own: big immediate cuts in spending, a dramatic cut in the top rate of income tax to 28% and a bold reform of Medicare for those 55 and under.

The Romney-Ryan response? "We agree. Medicare it is."

“I think it’s a very bold choice. And an exciting and interesting pick. It’s going to elevate the campaign into a debate over big ideas. It means Romney-Ryan can run on principles and provide some real direction and vision for the Republican Party. And probably lose. Maybe big.”

Loathe though I am to throw cold water on the party poopers of the GOP, I’m not quite ready to book my celebration at the Ritz just yet, and neither should any Democrat with half a brain.  True the Ryan pick just made Richie Rich’s path to the White House a little more problematic, but it’s not like Obama was floating on the wings of a dove.  There’s this little thing called the unemployment rate.  In case you haven’t been paying attention, no president since FDR has been reelected with unemployment over 7.4%.  Obama’s real opponent is history.  With just under three months to go until the November election, anything is possible.

But, still, I thought it would be interesting to look at the electoral map and see what a Romney-Ryan ticket means for November.  As expected, Obama is either tied or ahead in most of the crucial swing states that he needs to win reelection, but in a lot of those states his lead is slight.  Florida, Virginia, North Carolina, Iowa and Colorado are tossups; Wisconsin, Michigan, Nevada and Ohio are leaning Obama.  At present, Romney has no states leaning his way.  He’s either polling strong, tied or trailing.  He has a real shot at North Carolina, Colorado and Iowa. Unfortunately for him, Ryan’s presence is negligible at best in all three states.

So, just how does Ryan factor in to a Romney candidacy?  Here’s where.

First off, if you’re a Republican, you can kiss Florida goodbye.  The state has been a tossup pretty much the whole year, but as of late had been trending towards Obama.  The latest poll has him about 2 points ahead of Romney.  Now that Mr. Voucher is the veep, expect that trend to intensify.  I wouldn’t be surprised if the next poll shows Obama ahead by 5%.  In case you haven’t noticed there are a lot of seniors in the sunshine state.  Guess what every senior loves more than gin rummy: Medicare and social security.  I’d love to see Batman and Robin talk their way out of that pickle.

Second, dibs off the Badger state.  Yes, Paul Ryan is from Wisconsin.  So what?  Billy Joel is from Oyster Bay.  I still don’t think much of him as a rock ‘n’ roller.  Yes, having Ryan on the ticket means Obama will have to make a few extra stopovers during the fall; it may even mean losing a point in the polls.  At the end of the day, Obama wins the state by only 4% instead of 5%.  Not even Scott Walker could stop this train.

Lastly, two dead in Ohio.  If Romney loses Ohio, he has only himself to blame.  Ron Portman on the ticket might’ve made a difference here.  At present, Obama leads by 3 points, well within the margin of error.  No Republican has won the White House without winning Ohio.  If Romney loses both Florida and Ohio, it’s over.  Period.

To sum up, there is not one swing state where Paul Ryan makes a positive impact.  In fact, not only does Ryan’s presence on the ticket not do much for Mitt Romney electorally, it will cost him at least one, possibly two, badly needed states come November.  There’s no getting around it, the Ryan budget will now be front and center everywhere he and his running mate go.

This is the battle the Tea Party has wanted for over two years.  They finally have their wish, along with their man.  And for that, they and the GOP have Mitt Romney to thank.