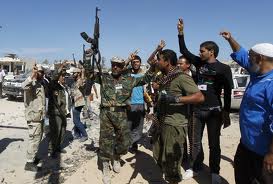 Now that Moammar Gadhafi has been put out of his interminable misery and the Libyan people are finally free to determine their own fate for the first time in over four decades, it’s time to give it up and admit that President Obama’s strategy regarding the insurgence was not only right, as it turned out it was the only way to effect the change Libya and the region so desperately needed.
Putting aside for just a moment the fact that the genocide that still goes on in Darfur rivals anything faced by the Libyans, this is nonetheless a historic occasion.  For the first time in what may seem like ages, the United States did not go into another country guns a blazin’ to dethrone a dictator.  For the first time, quite possibly going back to the 1800s, America did not take the lead and instead chose to be a part of a team whose mission was to “help” an oppressed people oust an unwanted tyrant.
Yes, I know we were part of a great big team called the Allies during World War II that defeated Hitler, and a couple of other despots.  Anybody want to lay odds on how that War would’ve turned out had we not “joined” the team?  Don’t look now, but I think that was your wiener schnitzel burning on der Ofen.  And while some would claim that the Clinton Administration’s involvement in the Bosnia- Herzegovina War set the precedent that Obama followed, the facts are that more than fifteen years later, much of what happened in that war and the “peace” that ensued leave much to be desired.
No, like it or not, the current President, not his immediate predecessor – who never met a mission he couldn’t un-accomplish – nor the one before him, has put in place a new paradigm for American foreign policy that, if followed, might actually transform much of the Middle East and restore our badly tarnished reputation.  For once, the neocons didn’t have their way.  For once they were forced to the sidelines and had to endure the painful reality that the days of the United States charging over San Juan Hill are effectively over, and not just because the country literally can’t afford it anymore.  The truth is it just wasn’t working.
This isn’t the 1950s anymore; hell it isn’t even the 1980s.  American hegemony, if it meant anything once upon a time, has worn out its welcome.  Most of the world has grown tired of our dog and pony show.  It was getting old fast.  Credit Obama for realizing that and for having the courage to chart a different course.  While we aren’t out of the woods yet – we still don’t know what kind of government will emerge out of the chaos in Libya and the Syrian situation is fast reaching critical mass – at least this time it wasn’t our military that hauled ass down the streets of a foreign capital pronouncing victory.  There’s something to be said for allowing a sovereign nation to decide its own fate that does wonders for your prestige, not to mention your budget.  Compare the $2 billion spent in Libya to the more than $1 trillion spent in Afghanistan and Iraq.
But if the Right needs to cool its jets and pipe down a bit, the Left shouldn’t be dancin’ in the streets if you know what I mean.  If I remember correctly there were an awful lot of liberals who threw Mr. Obama under the bus for his decision to even involve the country in the conflict in the first place.  Something about sticking our nose in where it didn’t belong and violating the Constitution.  Hmmm.  I bet they must feel pretty foolish right about now.  The truth is that, despite the fact that this President has had a horrific time drawing narratives and selling his vision of America to the voters, he’s made a number of calls that went against the grain; calls that in all likelihood will be vindicated by history.  This is just the latest one that, for now, goes into the win column.
Chalk one up again for Captain Pragmatic.

Brian Weston said…
Peter, you are spot on again. I was thinking the same thing myself. Admittedly, for all the pandering to the Tea Party/far right the president has been doing in his first term, he has actually FAR EXCEEDED my expectations as a foreign policy president. Between getting Bin Laden, getting the Egyptian president to resign, and now this, he is on quite a roll...and as you so elequently put, on a much cheaper trajectory. It goes to show that wars are no longer fought old school where two armies line up on a battle field and shoot at each other until the last man is left standing. Instead, they are fought in new ways - running airplanes into buildings, hacking into control computers at nuke plants, mailing disease viruses, etc. Obama is MUCH more keen than Bush EVER was on this.
October 21, 2011 at 6:40 AM