A Republican for All Seasons 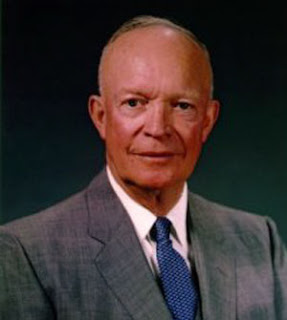 Funny how the GOP loves to refer to itself as the Party of Lincoln, even though that party long ago went the way of the dinosaur.  Fact is, it's been quite some time since Republicans had a president worthy of that banner.  The last such one was none other than Dwight D. Eisenhower and, while he may not have been the most prolific and polished politician - even in his day - his list of accomplishments is nonetheless quite distinguished.

Here are the highlights:

1. He ended the Korean War.

2. He launched the Space Race.

3. He appointed Earl Warren as Chief Justice to the Supreme Court, which subsequently led to the Brown v. Board of Education decision.

4. He enlarged Social Security by rolling it into the newly formed Department of Health, Education and Welfare.

5. He launched the Federal Aid Highway Act of 1956, which basically led to the construction of the interstate highways.

6. He warned the country about the growing influence of what he referred to as "the military industrial complex" in his farewell address to the nation in 1961.

But Eisenhower, for all his accomplishments, also had some regrettable moments.

During his term in office the CIA launched several successful military coups, notably the overthrow of a democratically elected government in Iran and the instillation of Shah Pahlavi, who ruled as an absolute dictator until his overthrow in the 1979 revolution.  That one blunder, alone, has been responsible for turning many an Arab and Muslim against the United States.

Eisenhower was also responsible for planning the Bay of Pigs invasion that John F. Kennedy regrettably carried out.  Oops!

Still, on the face of it, Eisenhower did a lot more good than bad.  With all the silly talk from conservatives and the Tea Party about taking back their country to what it once was, here's a thought.  Dwight D. Eisenhower would make a helluva good presidential candidate -  for the Democrats that is.  He'd be far too left of center for Republican tastes.  Hell, Ronald Reagan couldn't get nominated with this motley crew!