After the Gold Rush

June 29, 2010
If the nation has learned anything over the last three years it is that buying high is not a good recipe for success. Millions of mortgagors who purchased their homes in 2007 and early 2008 now own property that in all likelihood is worth less now than what they paid for it. And since market corrections occur in the housing industry every fifteen years or so, it will be quite some time before many of these owners will be in the black.

Well apparently lessons like the above are learned the hard way over on the Right where gold has now become the new investment fad. Well not quite a fad. Seems that gold has held a special place in the hearts of conservatives for years. To quote Stephanie Mencimer in a Mother Jones article titled, Glenn Beck’s Golden Fleece, “Amid economic downswings and social upheaval, the precious metal has come to be seen as a moral and political statement as much as an investment…And now, with the economy limping along and a black Democrat in the White House, gold mania has gone mainstream.” 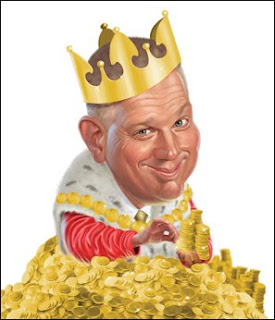 At the head of all this hysteria about the precarious condition of the dollar and the apparent demise of the United States sit the henchmen of the Right (Rush Limbaugh, Sean Hannity, Mark Levin, Michael Savage, and of course the CEO, Glenn Beck). This mob has shamelessly cashed in on the fears and insecurities of average, ordinary people and basically helped companies like Goldline rake them over the coals.
Forget for a moment that most of Goldline’s “investors” are overpaying for their gold, which in and of itself has prompted New York Congressman Anthony Weiner to ask the Federal Trade Commission and Securities and Exchange Commission to investigate the company’s “predatory policies,” the very simple fact is that once more the Right is using fear and ignorance to advance its agenda.
The incessant berating of this president and this congress by these “pundits” has not only subjected their minions to poor financial decisions, they have been responsible for an environment of contempt and hatred that has never seen its equal in the country’s history. It is deliberate and malicious. Worse, it has prevented serious dialogue and debate on actual policy. Moderate conservatives, such as David Brooks, are dismissed by this mob as being either lukewarm or a CINO (conservative in name only). When you are so far over to the right that you can’t see any daylight to your right, you’re no longer a conservative, you’re pathological.
And that’s what we are witnessing in America these days. Be it the Arizona immigration law, the pushback against any criticism of BP, the charges of death panels during the healthcare “debate,” shouts of socialism all throughout the last eighteen months, and now this latest gold rush to ward off the obvious pending demise of the country’s currency, all of this fits the paradigm of a deplorably bankrupt and incorrigibly malevolent movement that has as its goal the vanquishing of all who oppose it, and the domination of all political discourse within the nation. They exploit the very worst in people for political and monetary gain, with no conscience or accountability.
They are beneath contempt, and because the Left has abdicated its responsibilities and not seen fit to fight back against the lies, this cancer sadly now controls much of the debate in this country and is crafting a narrative that, no matter how ridiculous its premise might be, is actually gaining traction with many in the electorate. Fear and insecurity will make a person do almost anything, even abandon reason and logic.
The truth is that this is more than just about unscrupulous companies hosing their investors; it’s about manipulation on a massive scale. There will always be a ponzi scheme somewhere that dupes the gullible into giving up their hard-earned money. But the heated rhetoric that has become the far Right has gone above and beyond mere fraud. It has now taken center stage in this national tragedy; a tragedy that will consume everyone if it isn’t checked.
So get out your Krugerrands and get ready to hunker down in your bunkers. It’s going to be a long, hot summer and, I fear, a bittersweet fall. As R.E.M. used to sing, “It’s the end of the world as we know it.” In the ‘50s they built fallout shelters and waited for the mushroom cloud; now they just buy gold and wait for the apocalypse. It’s as though we have become the title of that famous comedy movie, “It’s a mad, mad, mad world!”